Is pervasive boredom all around you? Don’t you know how to spend your free time? Are you bored with monotonousness and endless repetitiveness ? Would you like to try out something completely new? Well … I’ve also been asking myself the same questions and hopefully more and more places start offering us unique kinds of entertainment, as well as great possibilities to have a nice afternoon. So called Escape Rooms have become quite popular for some time. They can move us to various corners of the globe, both the real world and the fantasy one. What does it really mean for an average mortal? 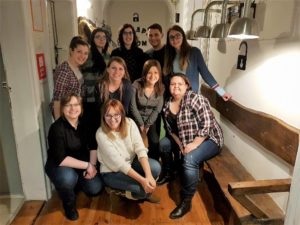 As their name suggests, Escape Rooms are the rooms from which you’re supposed to find the way out in one hour time. As I’ve already mentioned before, the rooms may be decorated according to different themes, from wild west to outer space, from ancient Egypt to the castle of famous Dracula … every kind under the sun. In every room you will find various clues, riddles and codes, which theoretically should help you find the way out.

How did this adventure look like in my case? Well, it was my first time … one of many which we experience in our lives. Generally speaking I had a certain vision of what might have happened in such a place, nevertheless a few things really surprised me. Let’s start from the beginning! We had chosen one of many venues in Katowice, which offered us participation in elaborately prepared mysteries and riddles just like from movies about famous Hercule Poirot. The place was situated in the center of Katowice, Stawowa Street 3/6. At the outset, our group was greeted by the host and divided into two teams. The first one was sent to ancient Egypt, and the second one to the castle of Dracula. For obvious, reasons I can’t reveal you everything, as it would seriously undermine the above mentioned friendly host’s business. So I’ll try to present everything in short. I was in the team which was literally sent to the world of ancient Egypt. The room was perfectly decorated with the sand beneath our feet and paintings on the walls, which looked like the original interiors of the Egyptian pyramids, and could certainly be associated with famous Pharaohs. Before entering this extraordinary chamber, we were given some instructions how to move around the room and we were told the introduction to our game story. Namely, during our holiday stay in Egypt, one of us … in fact a person calling for adrenaline … talked us into leaving a boring and predictable guided tour around the ancient pyramid and going sightseeing on our own. While admiring beautiful hieroglyphs in close, one of us … and certainly a clumsy person, pulled down on the lever and we all got stuck in a small room (PS. Slightly more detailed introduction is available on the Escape Room Katowice web page, so I haven’t revealed you too much information!). At the very beginning we were all very excited about the game, we were discovering various trunks, books and building blocks which were supposed to lead us to find the key opening the door and let us free to the real world again. While entering the room I had a thought ‘Great … it can’t be too difficult, can it?’, however my way of thinking was verified quite fast … and I was colloquially speaking knocked down a peg or two! After finding the obvious clues … we were left out and forgotten together with a heap of various padlocks which could be opened in different ways with the use of simple keys or complicated codes to increase the rush of adrenaline. The first half an hour would go by in no time, and unfortunately we got stuck … Egypt wouldn’t 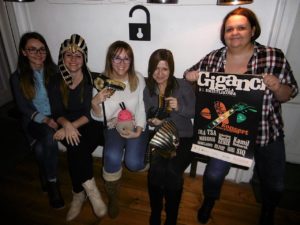 be Egypt without mobile phones … so we decided to call our host and a very close friend of Pharaoh … and we asked him for the first clue. The clock with red digits (a little bit like a time bomb) reminded us of passing time and we started making regular calls from Egypt to Poland as they occurred to be rather necessary … of course, we explained it to ourselves as so called homesickness. What can I say? We failed with putting building blocks together, they were of different shapes which made our task more difficult. The building blocks were supposed to help us find the key to open the door. While struggling with previously mentioned building blocks, I imagined a chimpanzee being prized for putting the blocks in the right holes. Unfortunately, we didn’t manage to get out of the room within an hour and we were beaten by the team from the Dracula chamber. But seriously … girls from my team were just awesome and did extremely well, they broke the codes, solved intricate mysteries and mathematical riddles. They also dug carefully the whole desert … and that’s not a small achievement!

This kind of entertainment is great and truly motivates to think creatively. I’d recommend it to all kinds of adventurers! You can also be like Indiana Jones … it’s enough to take a group of friends and visit one of the chosen Escape Rooms! I’ve already tried it out … and you? What are you waiting for?

Photo by Scott Rodgerson on Unsplash

Podoba Ci się? Udostępnij!
Previous StoryFat Thursday – to eat a donut, or not to eat? That is a question!
Next StoryHow to make your dreams come true?