While white snowflakes are swirling behind the window, creating a truly winter scenery, and temperature is dropping quite a lot below 0°C, reminding us of the fact that spring won’t appear sooner than in a few weeks’ time … I’m coming back to some trips, which took place in more favourable weather conditions. Today I’m going to go back in time to 2016, a year in which I had the opportunity to visit two beautiful and for sure worth visiting cities: Mariánské Lázně and Karlovy Vary in the Czech Republic.

Despite the fact that Poland adjoins the Czech Republic, the journey occurred to be quite long. We took a coach and departed from Chrzanów at midnight, and we arrived in Mariánské Lázně in the morning around seven or eight o’clock. I think that going by car would save you at least one hour time on travelling. However, seeing the fact that it was an early morning and not all the attractions were open so early in the day, the hour of our arrival appeared to be just ideal. We went on this trip in mid-September and the weather was just lovely. We could feel for a while as if we had been on summer holidays again. 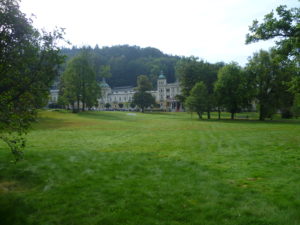 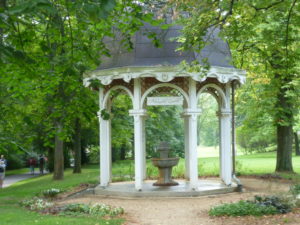 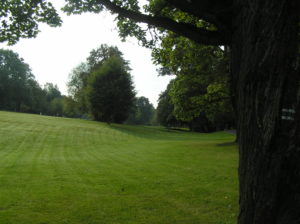 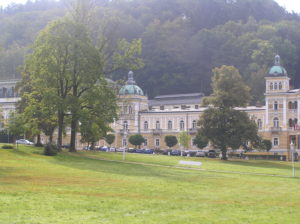 Mariánské Lázně is a town situated in Karlovy Vary Region. Despite its small size, this place offers its tourists a wide range of attractions. We started our sightseeing from a walk in a beautifully maintained park, which pleased our eyes with its lush greenery and neat lawns. There were also some bridges, fountains and arbors, which made this fabulous place even more charming. While walking on the paths, we could easily run across health resort visitors, strolling around and enjoying pleasant weather. Mariánské Lázně is a well-known spa town and a great vacation spot. It gained its popularity not only thanks to amazingly beautiful surroundings, but also thanks to the beneficial influence of its mineral springs. That’s why, this town is frequently visited by tourists from all over the world. The visitors make this spot so vibrant mainly because of its mild climate. 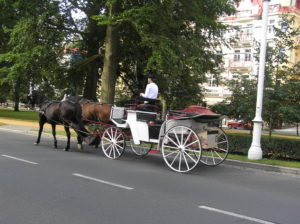 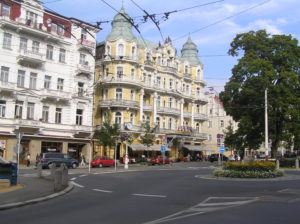 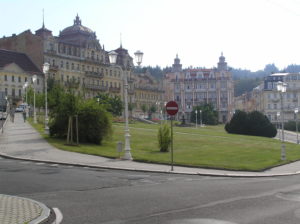 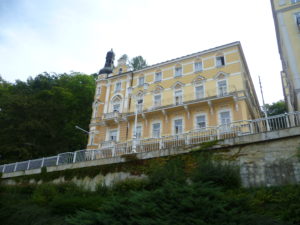 After a short walk in the park, we strolled across the resort, and our attention was attracted by renovated old townhouses, which gave this place a unique fairy-tale atmosphere. In the streets we could see passing through carriages with cabdrivers having their glad rags on. This made us feel as if we had gone back in time to the early years of 20th century. We walked past the buildings of Casino Marienbad, Town Theatre and other architectural gems on our way to so called Singing Fountain. 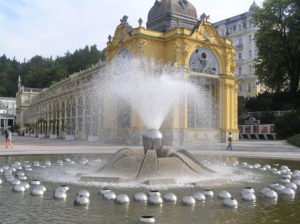 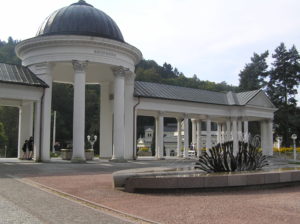 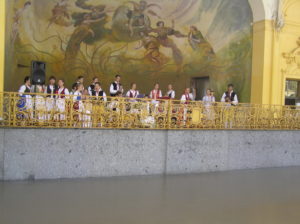 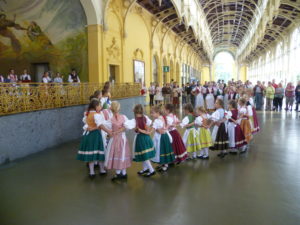 This place was surrounded by the spa facilities, which were a representation of a similar architectural style, as the rest of the buildings around the town. We had also the opportunity to admire dancing children, dressed up in colorful Czech folk costumes. These cheerful dances, accompanied by catchy folk music, enjoyed a moment of great popularity among foreign tourists. Our visit to Mariánské Lázně was ended up with the walk around the area of Singing Fountain, were our eyes were pleased again with stunning flower arrangements, which surprised us with their lushness, which would be rather uncommon for this season in our country. 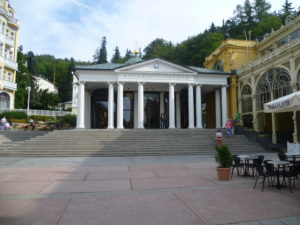 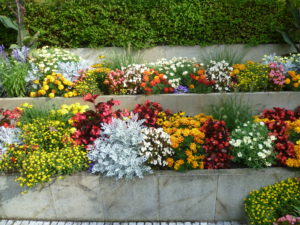 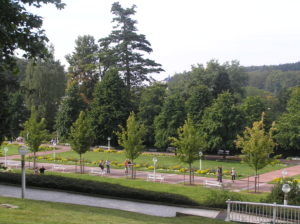 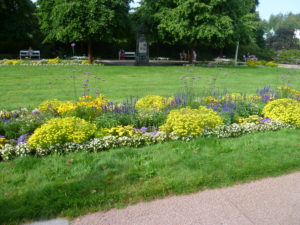 Next, we headed over to Karlovy Vary, which in comparison to Mariánské Lázně, was a much bigger city and the capital of Karlovy Vary Region. It’s also a very popular spa and holiday spot, famous for its beneficial mineral springs. This resort seemed to be very attractive too, however I think that Mariánské Lázně suited my taste more. 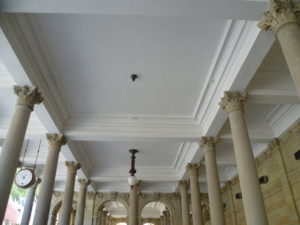 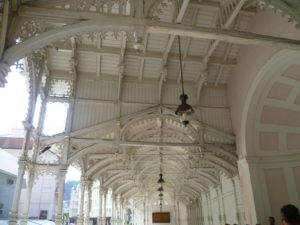 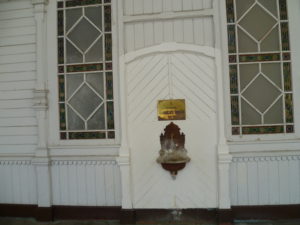 We started our sightseeing with a walk around the city, which was very busy and crowded. At every turn it was possible to run across groups of tourists admiring omnipresent tourist attractions. We visited, among others, Vridelni and Mill Collonade, which as their names suggest appeared to be structures based on elaborately decorated columns. We went to Hot Spring Collonade, where we could come across tourists deliberately sipping local spring waters from colourfully painted mugs.  The long mouth of the mug protects tooth enamel against the harmful impact of some components included in the local waters. After trying out hot springs, we went for a walk along the promenade surrounded by magnificent secessionist townhouses. We stopped by market stalls, where one could buy various souvenirs, from previously mentioned and so typical for this place mugs, to wooden toys for kids. 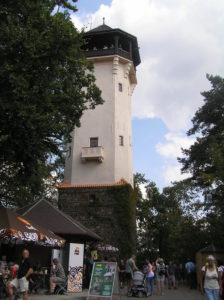 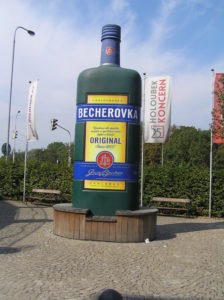 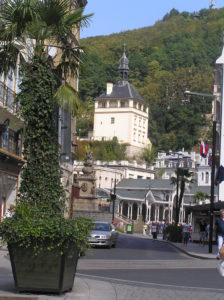 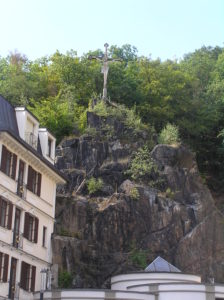 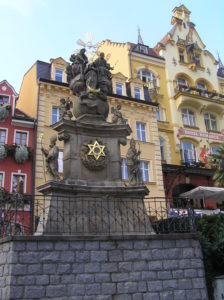 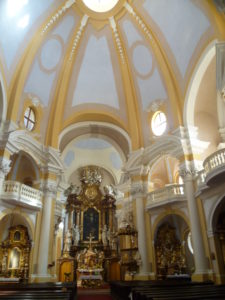 Another interesting highlight of this trip was a short ride by a funicular railway to the top of a viewing tower (Diana Lookout Tower). There was also situated a mini zoo and a room, in which we could admire freely flying butterflies of many species. We had the opportunity to take a rest and have something to eat, before we continued sightseeing and exploring this unusual city. After a short break, we had a chance to visit Jan Becher Museum, who was a creator of Becherovka, one of a kind alcohol, whose formula is known only by few people and kept confidential for years. I decided to buy Becherovka Lemond with a distinct lemon flavour. It was an interesting beverage, however it didn’t please my taste buds, as I’m not a big fan of herbal taste so characteristic for this kind of alcohol. After leaving that place, we went to the Moser Museum, where we could admire astonishing exhibits made of glass, which came from different periods in history. Next, we stepped into some Catholic and Orthodox churches, which delighted our eyes with gorgeous adornment. All the wonderful statues and paintings brought even more solemn atmosphere to these places. Finally, we could have a look at a famous Grandhotell Pupp, in which blockbusters such as James Bond movies were filmed. 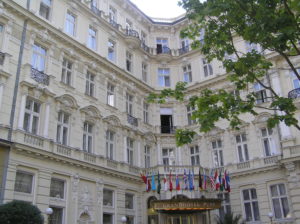 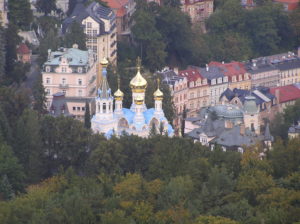 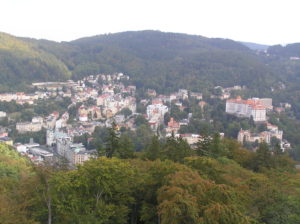 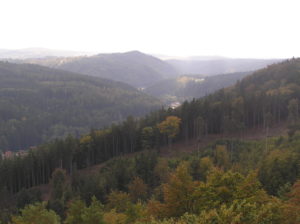 At the end of our trip to the Czech Republic, we had a meal during which we could also try delicious Czech beers, so characteristic for this particular country.

I can recommend visiting Mariánské Lázně and Karlovy Vary, because they are truly beautiful cities situated in our hospitable neighbouring country. I think it’s worth going there during the weekend, together with family or friends, and spend free time in a more active way, far away from everyday problems and sorrows. What are your favourite cities in the Czech Republic?