How did I fall in love with him? Very fast and the feeling was mutual! Are we really thinking about the same thing? To make the whole story of this torrid love affair more clear, I must go back in time to 2015. It was a rough year in my life because of many duties at work, which I didn’t really like too much, as well as because of some twists in my private life. I was looking for some forms of relaxation and some ways to get free from my everyday life … and in this way, day after day, my life was moving on.

It was a gloomy November afternoon, I finished work and I was on my way home, suffering from a terrible headache and a general apathy … I noticed him, and his short encouraging glance from behind covered with little raindrops glass. Something at the back of my head kept telling me that I couldn’t ignore him, as I would regret it until the end of my life. While entering the tiny newsagent’s, I felt a kind of magic … I stood in front of the one who attracted me to this place like a magnet … you can never ignore this kind of chemistry! I took it into my hand and I started frantically turning the pages … I already knew that was it! It was the first volume of a series of books by Nicholas Sparks, which was published by one of the Polish publishing houses – Albatros. It turned to be ‘The Notebook’, whose film adaptation I had had a chance to see before … so I had a thought, why not? And in this way I got to know Nicholas Sparks … maybe not in person, but through his work, which is really incredible.

At the moment I’ve got 19 of his books, out of which I’ve already read 17. Many of Spark’s novels have been put to the big screen and have occurred to be great movies. As every author, he’s got better and worse books, however a vast majority of them can be truly recommended. Today, I’ll try to focus on a few titles, which have just stolen my heart. 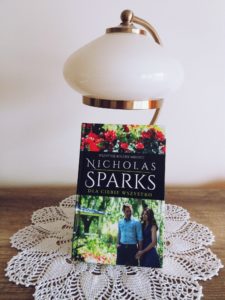 The main characters of this moving novel are Dawson Cole and Amanda Collier. It’s a story of a young couple, which was forced to split up under the pressure of family and society. Dawson Cole – coming from the worst family in the neighborhood, which has been causing problems for years and which has been a source of fear in the community, carries the stigma of an outcast, a guy who is unsuitable for girls coming from so called good families. Despite the fact that unlike his family members he doesn’t belong to the underworld of crime, his life hasn’t been a bed of roses. Amanda Collier – a girl coming from a powerful and rich family, who wants to experience the love of her life. In spite of all these differences both of them felt great affection towards each other, which despite social differences and completely different upbringing, was deep and honest. Unfortunately, due to all this disapproval which had accompanied them at every turn, they parted their ways for many years. Former lovers meet again while being in their forties at a funeral of their mutual friend, who used to be Dawson’s caretaker. Each of them carries certain burden on their shoulders, a sort of unspeakable suffering. Amanda, an unfulfilled in marriage wife, who has to face her husband, a man who abuses alcohol. A mother of four, out of which one died at an early age. This tragic event has taken its toll on the life of a seemingly decent and happy family. Dawson, who as a young man made a serious mistake and killed a man by accident, cannot come to terms with his past. He decides to live far from people, carrying the burden of his past mistakes. Will this meeting change their lives? Will their old feelings revive? Will real love win in the end? In the film adaptation the starring roles are played by Michelle Monaghan and James Marsden. 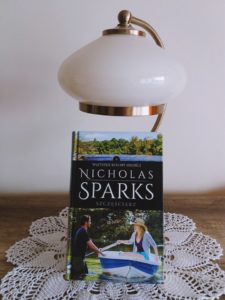 This novel presents an incredible persistence of a young soldier Logan Thibault, who in a miraculous way avoided death in Iraq. This brave man feels that he has his own guardian angel – a woman, whose picture he found in sands of the desert, where he took part in military exercises. On impulse, which was a sudden death of his friend, Logan decides to find this mysterious woman, whose photo has become a sort of talisman for him, especially in difficult moments of his life. Thibault starts his long journey through the country together with his faithful companion – German shepherd – Zeus. He finds the stranger from the picture in the North Carolina. Beth turns to be a divorcée, a single mother who tries to bring up her ten years old son Ben. While living with her ex-husband in a small town, she can never truly get rid of him. Keith, who cannot accept being left by his wife, tries to make her life as miserable as it’s possible. Her everyday life is filled with work and helping her granny, with whom she lives in an old house. Logan, who becomes Beth and Nana’s worker, starts slowly falling in love with the woman he was looking for. At the beginning, she isn’t aware of the true reasons of a handsome stranger’s arrival in her settled life. Will their love overcome all the problems which they will have to face? Will Logan reveal all the truth about his past to Beth? Will Keith come to terms with his defeat? In the film adaptation the starring roles are played by Taylor Schilling and Zac Efron. 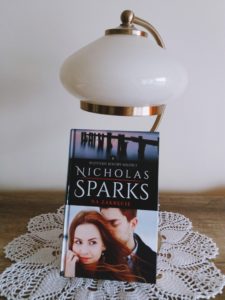 Life can write stories, which sometimes seem to be unreal, and yet this story is a great food for reflection on what is good and what is wrong. Can we always see the world in black-and-white? This story starts with a tragic accident, which has an enormous impact on Miles Ryan’s life, as well as on his son Jonah. Miles, a small town sheriff, tries to lead a normal life and to bring his ten years old son well. However, since the moment of the accident he cannot get rid of his obsession, which has overpowered him like an ivy and has taken away his true happiness. His main aim is to find a man whose car hit his beloved wife Missy, and who left the scene of accident. In spite of the fact that it’s been two years since his big loss, Ryan cannot come to terms with his past. He tries to focus mainly on work and his son. He seems not to need a new woman in his life. Sara Andrews, a teacher and a divorcée, who tries to find her new place in the world after a difficult divorce, moves into a small town. In an unexpected way, the paths of these two – severely affected by life people – have crossed. This triggers a series of dramatic events. Will love help them deal with their past? Will the tragic truth, which suddenly comes out, destroy their future happiness? Will loyalty and trust to a partner overcome the odds? This book hasn’t been adapted into a movie yet, but I hope that one day I’ll have a chance to see it on a big silver screen.

Can you always escape from your past? What if you are forced to leave everything you know to break free from a husband who is a real tyrant? Katie comes to a small coastal town in the south of the USA. The locals keep wondering what made this strange woman come to Southport and what kind of secrets she holds. Despite the fact she is very beautiful, she tries to be inconspicuous and she keeps out of sight. She finds a job in a restaurant, which helps her to be independent in a new place of living. Everything changes when she meets a charming and caring man – Alex, who also carries his burden. This young widower, together with his two kids, slowly wins Katie’s heart, who involuntarily engages in the life of this family. Will she be able to forget her past? Will the change of look and the change of identity be enough to get free from her brutal husband – cop? Will Katie resign from her love to stay safe? What if the obsession of a hurt man leads to tragic events, which will change the lives of these two forever? In the film adaptation the starring roles are played by Julianne Hough and Josh Duhamel.

Will losing her husband at the age of 25 change her life forever? Julie Barenson needs to find herself after losing her beloved man. In his farewell letter he promises her to always watch over her. Besides the letter, the woman receives one more present from her departed husband – Great Dane – which 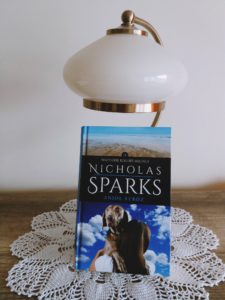 turns to be her real guardian angel. Despite being not too pretty, the dog becomes Julie’s best friend. After a few years, from the time when her beloved husband died, she decides to start dating guys to find a new love and a man with whom she could share her life. She soon meets Richard – a handsome gentleman, who makes a good impression on that hungry of love woman … however, her faithful companion – Great Dane – doesn’t accept Julie’s new admirer. Surprisingly, Singer is just fond of Mike who was her husband’s good friend. He is secretly in love with Julie, but he doesn’t know how to tell her about that. With time Julie starts noticing Richard’s character traits, which she doesn’t approve of. In consequence she decides to break up with her boyfriend. Will Julie be ready to face an emotionally disturbed man, who cannot come to terms with the pain of rejection? Will Singer protect his owner? Will Mike find enough courage to confess his real feelings to Julie? I hope that this book will also be adapted into a movie one day.

Nicholas Sparks is one of the authors who has stolen my heart. Getting to know his works, is so far the only romance, which has shown me so many different shades of love, as well as the ways in which to deal with difficult moments in our lives. I hope that if you haven’t had a chance to read any of his books yet, after reading this article you’ll decide to pick one of them.